The wall art is austere, featuring black and white silhouettes of the books’ characters in action: a man is raising a gun to his head. Another holds an ax above his, waiting to bring it down on a women nearby.

These are the stories told in Dostoevsky’s novels, which explore heavy themes of sanity within society. 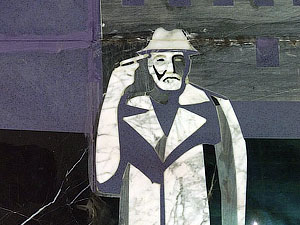 This is not out of the ordinary for Russian literature; from Tolstoy to Pushkin to Lermontov, Russian writers have gained fame exploring suffering, emotional paralysis and loss.

Dostoevskaya’s opening this spring was delayed at least a month, possibly in part because of an uproar in the Russian blogosphere over whether station’s design was too depressing. Some psychologists claimed it would become a magnet for suicides, which are apparently quite common in the Moscow metro.

There is no doubt that art and architecture can affect mood. From the view out your window to the height of your ceilings to the color of your walls, design will factor into your internal temperament.

Can public art be too sombre? Does it need to be uplifting to be worthwhile?

Certainly a great majority of the myriad outdoor murals that dot Philadelphia are full of positive inspiration, with imagery of colorful flora, fanciful dancers and symbols of pride and learning. And most of the other Moscow metro stations are decorated brightly, be they named for an embittered author or not. 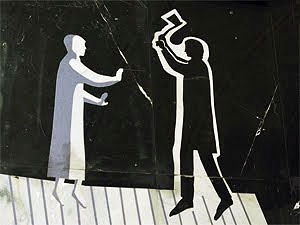 In contrast, we have  Antony Gormley’s recent Event Horizon, which featured lifelike statues posed on rooftops over Madison Square Park and frightened passersby into calling the NYPD to report suicide jumpers. In 2006 a statue of haggard horse riders commemorating Polish suffering that had graced Boston Commons for a quarter-century was abruptly moved; some claim because it was too depressing.

In fairness, there has been a heightened sense of danger on the Moscow metro since two suicide bombings killed close to 40 people this past March. The reported mastermind of these attacks was recently killed in a shoot-out with Russian security forces.

But the art does compliment the minimalist palette and clean, large lines of the station’s architecture.

As the artist, Ivan Nikolayev, said, “What did you want? Scenes of dancing? Dostoevsky does not have them.”

And as Dostoevsky wrote in The Possessed: “We are all happy, if we but knew it.”