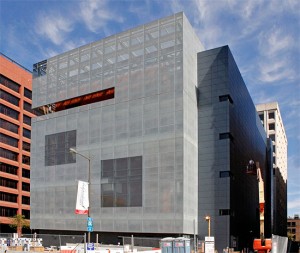 Talk about an upgrade.

This November, the National Museum of American Jewish History will open their brand new building on the Independence Mall in historic Philadelphia.

Since breaking ground in 2007, the impressive, 100,000-square-foot structure has been steadily rising, on time and under budget, just across from the Liberty Bell and the National Constitution Center.

The new location is a stone’s throw from the museum’s former home in a building shared with congregation Mikveh Israel. The old facility offered less than 2,500 sq ft of exhibit space.

Almost complete, the five-story outer facade glints in the afternoon sun, awaiting installation of an 8-foot LED light sculpture that embodies the qualities of a flame.

James S. Polsheck, founder of Polshek Partnerships (now Ennead Architects), whose past works include the Rose Center for Earth & Space in New York City, designed the outer glass structure to symbolize the translucency afforded Jews who have found sanctuary in America, and the fragility of this freedom.

Each floor of the museum opens onto a terrace encased in this artfully glazed glass, offering fantastic views and a space to clear your mind as you traverse the capacious exhibits.

Inside the glass, a terra cotta cube defines the inner volume. This hearty structure represents the solidity of the liberties that protect all Americans.

Warm anigre wood and cool glass create an exciting interior, focused around an 85-foot high atrium lit from above by skylight. 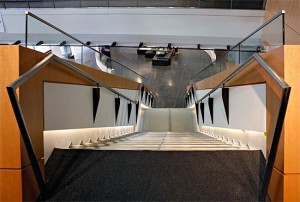 The top floor is event space, and already has several weddings, bar mitzvahs and other gatherings on the books.

Throughout the rest of the $150 million building, the extensive collection of Jewish Americana (the largest in the world, with over 25,000 artifacts) will be supplemented by a series of truly innovative displays.

A chronological timeline leads you through floors 2, 3, and 4, from the first Jews who settled in New Amsterdam in colonial times, to the explosion of Jewish immigrants in the late 1800s, up through the World Wars and late 20th century life. 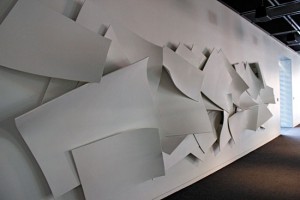 Several of the presentations are interactive. There are life-size models children can clamber on and play with. A video projection of letters and photos will add new images as they are donated. A theater outfitted with reclaimed wooden seats shows three movies on Jews in the film industry post World War II.

A storytelling booth encourages visitors to take two minutes to record their own story. These user submissions will be edited and worked into gallery presentations.

And on the ground floor is an unique media exhibit called the Only in America® Gallery / Hall of Fame [Ed – You can tell it’s unique because it’s got a registered trademark symbol], which tells all about the contributions of 18 well-known Jewish Americans. The subjects will change over the years, but the inaugural group includes the likes of Stephen Spielberg, Albert Einstein, Esteé Lauder and Irving Berlin.

Add the fully equipped Dell Theater, a suite of offices for museum staff, a kosher cafe and a store, and you’ve got a new thoughtfully designed, world-class destination that calls Philadelphia home. 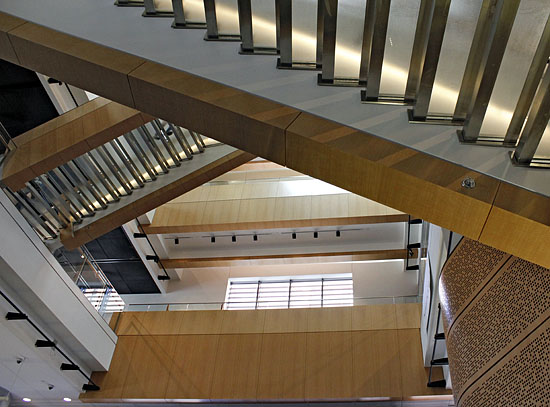 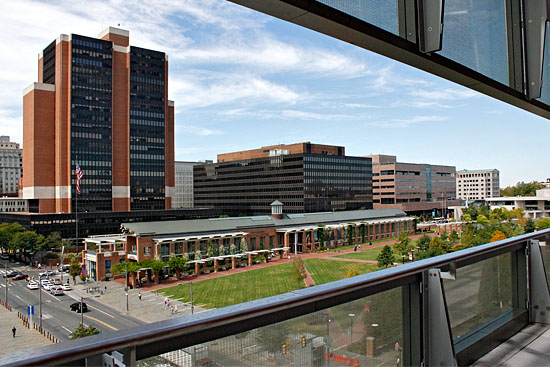 One thought on “Rekindled”