Like little four-sided theramins, these electronic blocks from Percussa in Brussels can be used to create and control music.

They are networked and scalable, and can sense not only the position of your hand around them, but their proximaty and position relative to other cubes nearby.

They’ve been demoed and used in performance already by several musical artists. 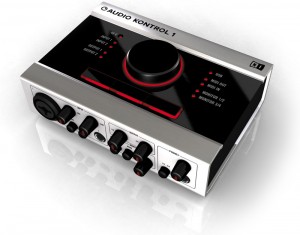 Native Instruments is an impressive company design-wise, as might be expected from this Berlin-based company. From their packaging to their manuals to their products, good design is kept at the fore.

Take their new Audio Kontrol 1, which is “not a sound card.”

It looks beautiful, and looks easy to access and use. From experience with other NI products, I know the “feel” of the knobs and buttons is wonderful, too. The interface is interactive, with subtle lights that react to your touch.

The Audio Kontrol 1 is a flexible controller, and all of the parts are user-assignable to different functions in different audio programs. Should be a powerful tool for making music, and all for under $300.

And it looks like they even went through the effort to take a great product photo, with a real reflection (very rare these days!).

Dennis Guidone designed this beautiful clock which will be on display for Milan Design Week and eventually produced by NAVA.

As others have pointed out, this clock has but two functions: (1) it tells time; and (2) it makes resetting the time for daylight savings a snap: you simply tip it over to the other side of its “base.”

Because you know how annoyed you are having to re-figure out how to set all the digital clocks on your microwave and stove. You’ve done it once, already, but that was almost a year ago!

Maybe the clock would tip over on its own, and I’d show up an hour early or late. Because of this, I’d carry around a photo of the clock as my ready-made excuse. Not so bad.

This watch by the same designer comes with the same built in alibi: “I thought I was on time, I really did…  “

Willard Wigan is an incredible artist from the UK who creates tiny sculptures, usually literally in the eye of a needle or on the head of a pin. The sculptures, which range in subject from pop culture characters to historical objects, are almost invisible to the human eye.

Wigan uses human, rabbit, fly and other hairs as his sculpting tools, creating brushes of different sizes. His website says that to create his miniature works, he “enters a meditative state in which his heartbeat is slowed, allowing him to reduce hand tremors and sculpt between pulse beats.” He says he does not enjoy the work itself, but enjoys the products when he is done.

Because of this, and the length of time each piece takes, originals are extremely rare, and are sold in a special glass viewing cube that includes a microscope. The works also tour on exhibition, under large insurance policies.

The iPhone can take a screenshot! It has been able to since the 2.0 firmware upgrade, but I didn’t know until I stumbled across it and took a screenshot quite by mistake. And didn’t even realize I had done it until it showed up in my camera roll. 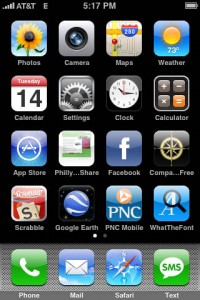 To do it you hold down the home button, then press and release the sleep/wake button. The screen flashes, and the snapshot is stored with your pics.

Interesting that they chose to dedicate this button combo to taking a screenshot. With only two buttons, there are a limited number of functions that can be physically triggered.

Having only two buttons (and the sleep/wake button is almost hidden itself — took me a month or two to discover it) makes for a very nice streamlined design. But I would give it up and add an ugly button if it would let me cut and paste…

This was one of my main quibbles with Apple’s design — the loss of functionality in the name of design. Such as no right-click on the mouse (mitten mouse, I called it). But, having not used Macs since 1997, little did I know that for the past four years, their mice have had right-clickability. You just can’t see the two different buttons, they are sensors under the single shell.

Turns out the iPhone snaps screenshots itself, all the time, in order to create the aesthetically pleasing “shrinking” of the screen back into the homepage. Some deem this a security flaw, and apparently police have harvested these screenshots to use against arrested suspects. 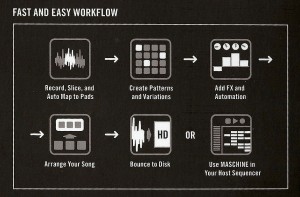 This graphic of icons better describes what the incredible new groove box Maschine does than all the words about it on their box, online, or in manuals.

A true example of great design by Native Instruments.

Wow. The new Sony OLED TV has impressive specs and garnered a lot of press, but you have to see it in person to really experience the jaw-dropping clarity of the moving image it displays.

It is currently on display (and available for purchase, just $2,499) at the Sony Style | Comcast Labs cool place (I mean, store) below the Comcast Center at 17th and JFK.

Looking at it is not like looking through a window. There is no glass in the way. Look through the little 12″  frame and you see what appears to be reality on the other side. Go check it out. 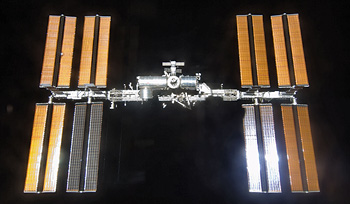 The International Space Station is very near completion with the success of the latest mission, the addition of the S6 Truss, the last part of the station’s “backbone.”

The design of the ISS evolved somewhat over the years since it was first conceptualized, but hasn’t changed too much.  It’s a relatively elegant structure.

I was surprised to remind myself that the Station’s construction began very recently in 1998, after the end of the Cold War allowed designs and ideas to flow more freely between Russia and the US, and also with Europe, Japan and others.

The ISS is a momentus accomplishment. Not only the impressive technology, but the coordination of design and construction thoughout so many nations all over the world. 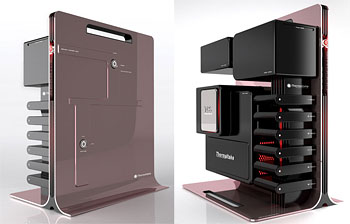 Form following function is a concept that I first grasped in Biology class. Specifically I think the first example of this that really drove the point home was the design of our lungs: all the bronchi and bronchioles branching off to create the maximum surface area to transfer oxygen to our blood.

In design it’s a strong concept. One I like to follow. In this new “gaming computer” tower by BMW Designworks Group for Thermaltake it really works.  From the designers:

Each high-quality component featured by the “Level 10” concept is enclosed within its own protective case, rendering it not only an integral part of the design but also guaranteeing interchangeability and transportability.

The concept also has an aesthetical answer to the physical necessity for best possible cooling, this also being associated with the virtual world of the gamer. The asymmetric arrangement of the robust vertical heatsink and the horizontally located individual components creates a strong architectural statement, clearly revealing the powerful cooling characteristics of the Thermaltake Gaming Tower.

Usually our workstations end up with the cover off, for better cooling, so they look like this anyway, only not nearly as pretty. Via Core 77.