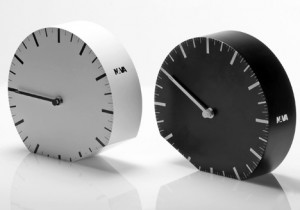 Dennis Guidone designed this beautiful clock which will be on display for Milan Design Week and eventually produced by NAVA.

As others have pointed out, this clock has but two functions: (1) it tells time; and (2) it makes resetting the time for daylight savings a snap: you simply tip it over to the other side of its “base.”

Because you know how annoyed you are having to re-figure out how to set all the digital clocks on your microwave and stove. You’ve done it once, already, but that was almost a year ago!

Maybe the clock would tip over on its own, and I’d show up an hour early or late. Because of this, I’d carry around a photo of the clock as my ready-made excuse. Not so bad.

This watch by the same designer comes with the same built in alibi: “I thought I was on time, I really did…  “