A new take on the enhanced beverage market, the drink relies on L-Theanine, Camomile and Hops, among other ingredients, to impart relaxation and calm.

Red Bull is none too happy with this inverse clone, and has sent the company a formal request to close, on grounds of packaging and design infringements.

Are they really worried fans of their high-octane swill will switch to this soothing alternative? Or maybe just feel that they are being ridiculed. (They are…)

The logo is brilliant (wish I could find a larger version). It deserves a wider audience.

Along with the Fail Whale, we should have the Slow Cow!

[Via @mjginnyc and Daily Fork] 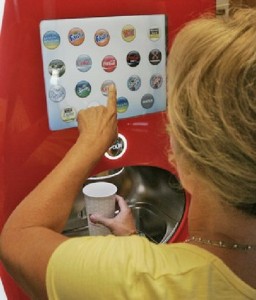 The soda fountain hasn’t changed much in basic design since it was first popularized and democratized in the late 1800’s by Jacob Baur, founder of the Liquid Carbonic Company, whose main contribution was the manufacture of carbon dioxide in easy to transport tanks.

At today’s dispensers, usually found in restaurants, you can choose from around six or eight different types of soft drinks.

In the Taste It room at the World of Coca-Cola in Atlanta, you can choose from 60 different kinds, which are dispensed from six separate cylindrical kiosks, taking up a whole room of the venue.

But now, starting in a few select Jack-in-the-Boxes (Jacks-in-the-Box?) in San Diego County, Coca-Cola is rolling out what they have dubbed the “iPod of drink machines.”

The Coca-Cola Freestyle lets the user select from over 100 varieties of soft drink from a touch screen.

This was enabled by rethinking the internal design of the dispenser, which uses small cartridges of concentrated flavor instead of bags of syrup.

Vince Voron, the senior director of industrial design at Coke, was recruited from Apple, so the comparison to iPod is more than fair. He notes that one of the challenges in designing the user interface was to make it friendly and not reminiscent of an ATM.

Fast Company details some of the technology behind the machine: the “PurePour” used to mix in the flavors was originally developed for precise delivery of dialysis and cancer drugs; cartridges are kept in order using RFID radio frequency tags.

And in what should be good news for shop-owners and Coca-Cola alike, each Freestyler wirelessly communicates with HQ, sending info about what was consumed, when, how much, and receiving info about products that should be recalled or discontinued. (Guess with 100 flavors that’s more & more possible.)

Test markets this summer are said to include California, Utah and Georgia. Reason enough for a trip down South?

[via San Diego Tribune and Core 77]

An interesting new liquor is about to hit the market.

In fact it was at the Headhouse Farmers’ Market that I ran into the promotional table for it.

It is Root, an 80-proof liqueur based on Root Tea. From the promotional card:

Root Tea goes back to the 1700’s, when settlers picked it up from Native Americans. Over generations, Root Tea grew in potency, particularly in Pennsylvania, where the ingredients grow in abundance. During the Temperance Movement at the close of the 19th century, a Philadelphia pharmacist removed the alcohol and rechristened it (ironically) Root Beer for hard-drinking coal miners and steelworkers. 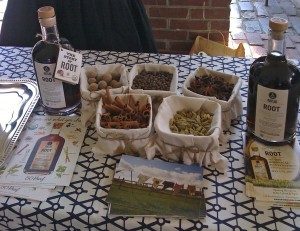 I didn’t realize previously that Root Beer had its roots in Philadelphia, so to speak. Charles Hires, that pharmacist,  first sold commercial root beer to the public in 1876 at the Philadelphia Centennial Exhibition.

Brought to you by Art in the Age, an offshoot of Gyro ad agency, with great designs featuring gorgeous illustrations by Reverend Michael Alan.

Should be available in PA State stores this summer. Interested to try it!