After six years with various iPhones, I lasted all of five days trying out my first Android smartphone. But I’m not mad about the $50 restocking fee I had to give the AT&T store to give the Galaxy S5 back. It was a worthy experiment that made me realize what I do like about iOS and what I want out of a phone in general, plus helped me break some less than stellar habits. Here’s what I learned.

1) I want my text messages pushed to me.

I’m not a big fan of push notifications — I have pretty much all of them turned off — but I rely on push for accessing texts quickly and easily. It’s something that defines the medium (for me, but obviously not for everyone). I used to get miffed/mystified when my Android-using husband didn’t get my texts right away, but now I know why.

One of the deal-breakers with the Galaxy was its inability to push messages so I could check them with a simple glance. A “New Message” notification pops up if you want, but you have to swipe and key your password in and launch the app just to find out who sent it. I use Google Voice, and there’s a widget I installed to have the message show up on the homescreen, but it was still several steps too many. 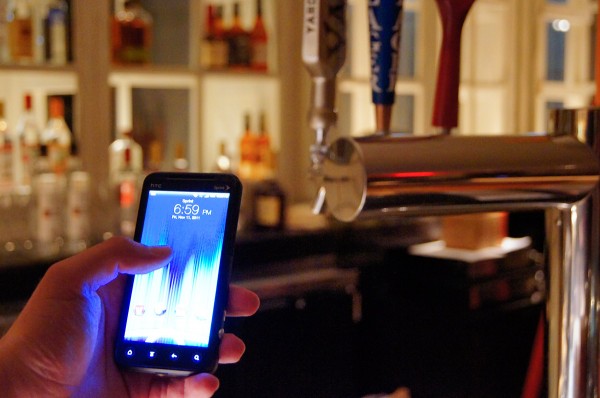 I don’t think it was just that my relatively small hands had trouble reaching the edges of the Galaxy screen that turned me off to its size. On paper, the S5 (5.59″ x 2.85″) doesn’t look that much larger than the 5s (4.87″ x 2.31″), but you can definitely feel it. Whether slipping it into my shoulder bike/camera bag, my purse or just holding it in the palm of my hand, the Samsung device just felt unnecessarily big.

I did love several things about the large viewport, including the luxury of having numerals on the same keyboard screen as letters (passwords have never been so easy). Viewing high-res photos, like my Flickr stream, was gorgeous. But scrolling through Instagram was obnoxiously overbearing — those vignettes are not meant to be viewed with such clarity.

There is no other Twitter app like Tweetbot. I knew that, in theory, but being forced to try to use either Twitter’s own app or Android options like Plume made tweeting into a chore instead of something fun. I’m not a huge user of apps in general — I use Google for contacts, calendars, email and voice (which is why I thought Android would work for me) — but if all iPhone apps are as heads and shoulders above Android apps as this one, I’m sad for the state of the Google Play Store.

Though I thought otherwise, I do not want a true desktop computer in my pocket. Yes, it would be nice to have access to system files and folders, but for me, that’s a theoretical desire. I mostly use my phone for fun and/or quick access to the internet, camera, Twitter or texts. Granted, I work at home, so most of the time I stand in front of three monitors hooked up to a roaring Windows 8 machine. If your job has you on the go or on site all the time, a device on which you can be productive might be for you. But I want my phone to be easy, cute and simple.

iPhone is the call girl of the smartphone world. Cute, happy to let you pretend it’s dumb, gives you what you crave, takes your money.

5) I don’t need to carry the phone everywhere I go.

Because the iPhone is so alluring, it’s super easy to get into the habit of carrying it everywhere. I wasn’t one of the worst phone addicts — as noted, I have most push notifications off; I don’t even get a buzz when a new email arrives — but I had grown used to having the physical phone by my side at all times. Even though I wasn’t obsessively checking it, I’m sure having the phone near me led to jumping on Twitter too often, or otherwise distracted me from a nice moment or conversation with my husband.

During my five days with the Galaxy, I broke that pattern. Because I definitely did *not* love that phone, I took to leaving it at its charger near my desk, or even forgot where it was for the night and found it in my shoulder bag the next morning. I’m pretty sure this led to less stupid tweets. Near the end of my Android experiment, I was even followed by @mims, which I took as proof of my theory. I’m keeping the new routine.

iOS systems degrade over time, but when they’re brand new, they’re hard to beat. My old phone had issues with iTunes being glitchy (playlists not updating fully, songs refusing to download) and space management (the dreaded “other” taking up a gazillion gigabytes). No amount of resets or refreshes managed to fix this for long. With a fresh system, all the problems were gone. I have to remember to view iPhones as having a shelf life. My phone will never be as wonderful as it is right now, and maybe in another year there will be something else to beat it.

But I’m glad I smashed my old phone’s screen and ran this experiment. Trying something new can knock you out of your familiarity bubble and make you realize what you love about the old.