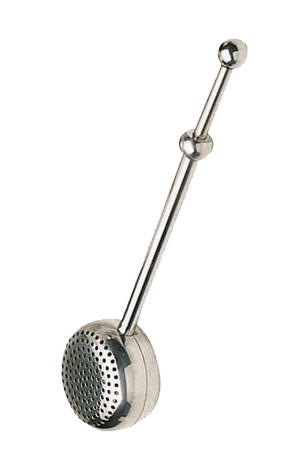 Good design is a synergistic meeting between form and function, not a compromise where one overshadows the other.

It’s always disappointing when something looks wonderful, but does not perform.

This stainless steel tea infuser from Kitchen Craft, for example, seems like it will be pretty cool.

It sports an attractive, sleek shape, and the way it opens — by pressing down one end so the tea-holding ball slides in half — is fun. But it completely fails at its intended task.

When you release the tip to close the ball after dipping in loose leaves, the halves slide back over one-another, pushing out a good deal of your tea.

When you want to empty the used tea, you discover that even when you push the spring-end as far as it will go, the two hemispheres don’t completely separate. Much of the dredge is stuck in the ball. It takes a few uncomfortable swipes of the finger to clean it out.

“Form follows function” has been a popular credo of modern design movements, from architecture to products to programming. The idea and phrasing is usually attributed to Louis Sullivan, who in the late 1800s designed the first modern skyscraper.

But aesthetics are intrinsic to perception, and can play an important role in the success or longevity of an object. And as the New York Times noted recently, the digital age has allowed us to move farther and farther from the need to connect the two. The tiny iPod Shuffle is their premier example.

And sometimes it’s worth conceding a bit of practicality: the Cube Jigger was derided by a few bartenders as unusable for the quick pours needed in a restaurant setting. But for a home user, the cool look makes it a fair trade off.

Have you run into an object that sacrificed functionality for good looks? What was it? Was it worth it?

One thought on “Form Fail”