Artist Amy Orr works in a novel medium, one that only recently became readily available: plastic cards. She cuts them up, then rearranges the fragments into mosaic-like compositions.

Previously the exclusive realm of Visa, MasterCard and American Express, in the early 1990s plastic calling cards were introduced. Unlike traditional credit cards, these cards were relatively disposable. In the late 90s, the plastic gift card began replacing gift certificates, starting at McDonald’s and spreading rapidly through retailers everywhere. In the past decade, the plastic gift card has become the most popular present. 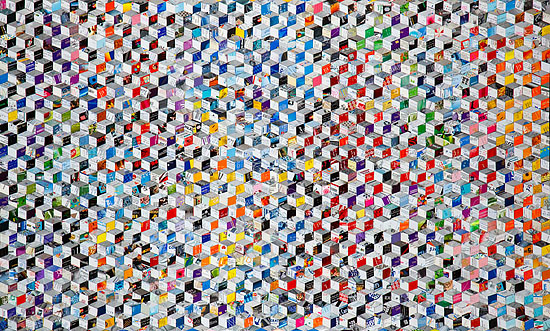 In 2006 alone, an estimated 17 billion of these cards were produced. There are a couple of companies that have popped up to either collect and recycle the cards, or to resell and exchange them. Orr’s decor pieces are aesthetically pleasing, but also a statement on the rise of consumerism across the globe.

Amy is one of several emerging crafters who will be featured along with established artisans at the Philadelphia Invitational Furniture Show, opening this weekend at the Naval Yard.

Friday evening’s Preview Reception will benefit InLiquid, a Philadelphia-based non-profit that helps artists gain exposure and promote their work. The reception will feature Orr’s work, along with others who work with “recycled materials.”

As long as industry and science continue to find and develop new materials, craftspeople will find ways to make them into art!