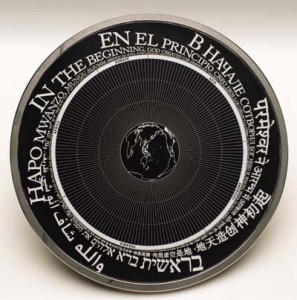 The Rosetta Project and the Long Now Foundation are building an archive of all documented human languages.

The disk holds 1500 languages from around the world.

Made of double-sided micro-etched nickel, the disk is a visual archive, not a digital one. Not format-dependent; all one needs to read the disk is magnification. Like microfiche, but with much more density.

One side of the disk is a guide to the main archive on the reverse. It is etched with a central image of the earth and a message written in 8 major languages:

The message is printed in concentric spirals, both maximizing the number of people who will be able to read something immediately upon picking up the disk, as well as implying how to use it – magnify to see more.

Five actual disks have been produced, which come in a spherical stainless steel/glass container intended to protect and showcase the disk for millenia to come.

Now, the disk’s contents are available to the general public on a $15 DVD, or, thanks to Kurt Bollacker, in an interactive viewer on the web.

Contents range from descriptions of linguistic to vocabulary lists to transcribed texts or oral narratives.

At the very least, the Rosetta Disk provides an informative overview of human linguistic diversity in the 21st century. However, it may do much more.