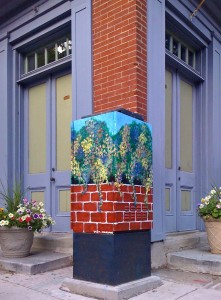 Last December the Philadelphia Streets Dept. ripped up the sidewalk corners in much of the Wash West/Society Hill area, one block at a time.

New signal boxes were erected and cast into the concrete, in anticipation of an (ongoing?) $12 million project to deploy digitized traffic signals throughout the city.

Because of a Federal DHS mandate to include future surveillance equipment along with the lighting equipment, the new signal boxes are huge, probably 3-4 times the size of the previous, pole-mounted ones.

As the Inquirer’s Inga Saffron points out with her usual acumen, these empty boxes look like huge brown refrigerators, and are an urban design nightmare in our neighborhoods of rowhouses.

On her blog she highlighted a few of the more egregiously placed metal monoliths, and noted that the flat sides were an empty slate almost begging for graffiti.

A prime example was this one, smack up against the historic house owned by Marjorie Amrom.

It appears that Amrom’s gone and had an artist paint a very attractive and colorful trompe l’oeil, or mini mural, all over the offending box.

Can we get the Mural Arts Program to commission a project to paint the rest?

UPDATE: Inga Saffron wrote another follow-up post, highlighting this box. She mentions that it might be “going a little too far” to paint all of the signal boxes like this. And a commenter points out that getting neighborhoods to agree on a design might “take as long as fixing the city budget.”

I still think it’s worth a try.

4 thoughts on “Drawing on the Refrigerator”