It wasn’t until sophomore year in college, when I met my future husband, that I actually tasted really great coffee. My caffeine addiction – by this point I couldn’t make it coffee-less past noon without a splitting headache – led me to spend an large amount of time in the many cafes of  Providence, RI. While Starbucks had already begun its march to nationwide dominance, the green mermaid had yet to reach this New England town.

Independent coffee houses were everywhere, and my man was the manager of several, even learning to roast for Ocean Coffee Roasters, who provided many establishments with locally cooked-off beans (back in the early ’90s, before local was cool). In our loft we had a vacuum pot – or several, as the delicate multi-piece glass contraption had a knack for getting smashed to bits – and we reveled in brewing interesting blends of African, South American and Indonesian strains. Thanks to the cafe connections, we even had access to prized Hawaiian Kona and Jamaican Blue Mountain beans, now and then. 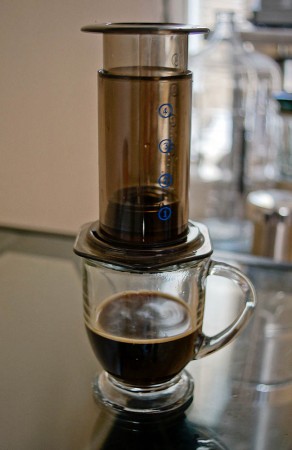 Over the past two decades, our coffee routine has varied. There was a time, stuck living in the suburbs of South Jersey, that we saw fit to brew each morning using an industrial Bunn automatic drip brewer. There was an espresso phase, brought on by his spontaneous purchase of a $1000 all-in-one machine, a compact Italian-made device, the open-box floor model on sale for half-price at the Starbucks the next town over. Several methods were explored for home-roasting our Sweet Maria’s-ordered green beans, too: tiring our arms by hand-shaking a hot-air popcorn popper, getting frustrated over the inconsistency of a micro-batch air roaster. We settled on the dog-bowl method, using a heat gun, which we still use to this day.

By the time we moved back to the city, Chemex carafes were all the rage, and after I had the chance to pick one up for free (a friend got married and served the whole party  Chemex-brewed goodness along with the wedding cake, so she had extras), we turned to that for our daily cup. Along the way we tried simple porcelain hand-pour cup-toppers, and even the Clever Coffee Dripper, the first time a plastic brewing device impressed me.

Last year, my husband happened upon an AeroPress while shopping in Philadelphia’s Italian Market, and brought one home so we could chuckle together about this odd-looking brewing device from the makers of the better-than-a-Frisbee Aerobie. With some trepidation, we tried it out, growing ever more excited as our tweaks to the ratios of grounds and water and timing produced ever tastier sips.

When I made a cup after self-proclaimed coffee nerd Mat Honan tipped me off to the inverted brewing method, used by many competitors at the World Aeropress Championships (oh, yes they did!), I knew I had found coffee nirvana.

@phillydesign I love mine too, it’s fantastic. Tried making it upside down? timwendelboe.no/2009/06/top-3-…

Why does this hand-sized apparatus work as well as it does, and where did it come from? Palo Alto-based inventor/engineer Alan Alder holds over 40 patents, including one for the Aerobie flying disc, and he set out to create the perfect way to make coffee. After much experimentation, he came up with the final design, which has three distinct parts, made of three types of plastic: copolyester, polypropylene and a rubber-like thermoplastic elastomer (all of which are entirely food-safe).

The AeroPress achieves a great quaff thanks to achieving several of the “holy grails” of great coffee making. Here are brief descriptions of a few:

The other fantastic thing about this coffee-head/design-o-phile’s dream? Despite all parts being manufactured in California, it’s extremely affordable, ringing in at less than $30 on Amazon.

What are you waiting for? Go forth and press!