Note: This was originally written as a submission for Longshot Magazine, Issue 2: DEBT. Thanks are due to Andrew Nusca for editing.

In 1792, recognizing that a national currency would help establish the identity of a nascent country, four men — George Washington, Thomas Jefferson, Alexander Hamilton and David Rittenhouse — partnered to establish the First Mint of the United States. To build its coffers, the Mint solicited merchants’ private stocks of gold and silver and returned the metal to them as coin. This was accomplished with a very modest operation, comprising three small structures.

The first was a smelting furnace, to melt down raw bullion. The lumps of molten metal were then transferred to the second facility, where a rolling mill powered by a pair of yoked horses in the cellar made numerous passes to flatten the material into a sheet of appropriate thickness. It took three men to complete the last step in the process, which involved the operation of the hand-cranked machine that took circular planchets cut from the sheet and struck them, turning them into coins. Standard denominations were established, including dimes, quarters and half-dollars, all the way up to the gold eagle, a single piece worth $10.

In 1933, a series of $20 “double eagle” coins were struck, but never released to the public. The following year, president Franklin Delano Roosevelt signed the Gold Reserve Act, which outlawed possession of gold by the general population. Only two examples of 1933 double eagle series were allowed to remain, for posterity, with the rest destroyed. Or so the government thought. 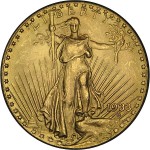 Years later, several of the illicit coins turned up in the collections of well-off numismatics. Seven of them were recovered quickly, but others proved harder to get. In the 1950s, King Farouk of Egypt — a collector of Faberge Eggs and other small valuables — managed to obtain one of the last remaining double eagles not recovered by officials. His reign ended soon thereafter, and for a half-century, the coin floated around the numismatic black market. In a 2001 sting operation, the U.S. Treasury recovered the piece, and subsequently sold it at a Sotheby’s auction for $7.5 million.

But “last” is an elusive qualifier, and in 2004, Joan Switt Langboard discovered an additional 10 double eagle coins in a lock box that had been owned by her father, Philadelphia jeweler Israel Switt. In July 2011, after a seven-day examination of events from almost 70 years prior, a jury determined that the illicit gold coins had been stolen from the U.S. Mint in Philadelphia. 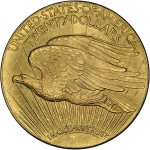 Federal prosecutors argued that Switt, most likely with the help of a corrupt Mint official, had illegally transferred them to his possession and subsequently made them available to collectors around the world, including King Farouk. “Israel Switt and some of his friends stole 1933 double eagles from the Philadelphia Mint,” assistant U.S. attorney Jacqueline Romero said in closing arguments.

The ruling allows the federal government to repossess the double eagles, clearing the way for the Treasury to sell the coins — all of which, of course, were originally destined for the smelting furnace. Now worth far more than the material they’re made of, the rare pieces will likely fetch a huge sum. A private merchant is again the enabler.