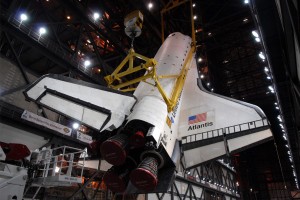 Here, a rarely photographed but critical part of any shuttle flight, inside the Vehicle Assembly Building (VAB), where the shuttle body is attached to the fuel tanks and boosters. Photo via Boston.com’s awesome “Big Picture” feature.

From some folks working at the Kennedy Space Center (via email):

The VAB was built for the Apollo program, and never reconfigured for the shuttle, hence the lift over the structure, up, over and down to mate with the tank and boosters).
The certification for the persons operating the crane is awesome; I was lucky enough to be working in the VAB while they were certifying a fellow. In the early days they put a spray can on an upside down wastebasket sitting on VAB floor and the fellow operating the crane is up 467 ft., working blindly. A fellow on the floor with a Walkie Talkie guides him, the last foot or so  just going down in increments of 1/16th of an inch. The operator has to lay the crane on top of the spray can and empty the contents. One day they decided that the can might explode, so they went to an upside down styrofoam cup, the operator can’t crease it. The crane, by the way, weighs 50,000 lbs.