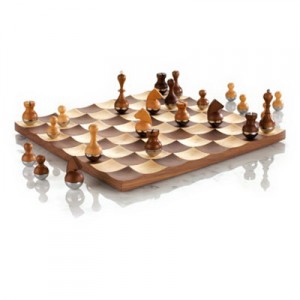 Who said chess had to be staid?

The maple and walnut pieces are finished with rounded chrome zinc bottoms that sway when placed in the concave spots on the polished wooden board.

Many will recognize the inspiration for the set’s design as the Weebles, Hasbro’s roly-poly toys that were common in the 1970s. “Weebles wobble, but they won’t fall down!”

Unusual chess sets abound, from one etched from Waterford Crystal to LEGO playing pieces to Givan’s custom-constructed vertical board, found in high-profile venues such as Jay-Z’s 4040 Clubs.

In adding quivering motion to this refined pastime, Mumma has created something new. Thoughts of Lewis Carroll cannot be far behind.

One thought on “Topsy Turvy Chess”