I previously mentioned the Philadelphia Sketch Club, founded in 1860 by some famous Philadelphia artists on Camac Avenue (that of the wooden cobblestones).

Don’t think I ever read the historical sign that is currently posted in the Avenue, though. These signs, erected by the Pennsylvania Historical and Museum Commission since 1946, are studies in idea condensation.

Way before Twitter, the designers for these signs did a pretty great job compressing history, philosophy, biography and more into signs that measure approximately 1ft x 2ft and hold less than 250 characters.

This one holds a gem of a sentence. One that deserves more publicity than it’s small alleyway allows.

Artists found that social interaction enhanced the creation and appreciation of art.

These will eventually replace all of Center City’s 900 wire trash cans, which are truly a mess.

The ones on Broad are paried up with recycling containers, the city’s first. Good step forward.

Visually, the dark brown of these compactors is a good look, much better than the busy green patterns that the initial test cans sported. Perhaps the cans will be different colors for different neighborhoods.

As far as usability goes, I don’t like touching trash cans, so that is the drawback. You have to pull open the top drawer to throw away something.  But that’s a necessary part of the design, allowing the compactor to work. Officials also hope this will stop the common habit of “tossing” trash towards the basket… and the common habit of missing.

Perhaps we’ll have less of a Philthadelphia?

Update: A foot pedal! Wouldn’t that solve the touching-the-dirty-handle issue? I suggested this in comments on several articles around the web…

In the city of Philadelphia, there should be an above ground trolley for tourists. Call it the “Liberty Express” .

It runs from Penns Landing to the Art Museum, down Market Street and then down Ben Franklin Parkway, with a total of 5 stops.

Powered via the tracks.  Not a whole lot of work to install tracks on the surface of that route, especially the Parkway.

Smart cities generate revenue and buzz using their trolley lines as tourist attractions. Otherwise these days a trolley is really not an efficient mode of public transportation.

Oh, and it should be mostly funded by the Casino. The 8th St – Convention Center stop will be inside the casino, or at least in a port-o-cul type entrance tunnel.

Who could make it happen? 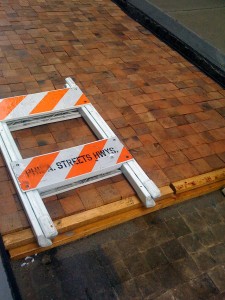 Supposedly unique in the USA, Camac Street between Walnut and Locust is paved with wooden cobblestones.

Single-lane Camac street is also known as “Avenue of the Artists”.  Historically it was home to many important artist clubs and organizations, such as the Philadelphia Sketch Club, started in 1860 and led by Thomas Eakins.

It is surmised that the street was paved with wood instead of the traditional stones or granite belgian blocks to help mute the sounds of the horses’ hooves as traffic passed by the artist gatherings.

These square blocks of wood were re-discovered in the late 1980’s during a street resurfacing project, and the city decided to repave this one section with wooden replicas of the originals. 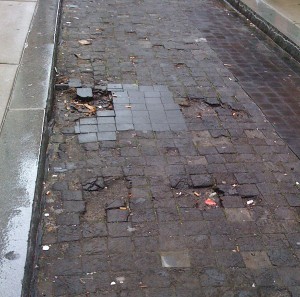 The wooden blocks are currently being replaced, which needs to happen every several years, as they begin to disintegrate and rot. Wooden block streets are attractive, but not enitrely practical.

It should be pointed out, however, that asphalt also requires replacement or resurfacing relatively often.

Though there don’t seem to be other preserved or refurbished streets like this in this country, wooden cobblestones can be found in historical sites around the world, from Prague to Havana.