By flipping a to-go container top upside-down, Cuba Libre restaurant in Old City, Philadelphia, successfully solves one of the pressing issues of packing a restaurant dish to go.

The cold parts of the dish — in this case, a side salad — are placed in the bottom of the container, then a plastic top is turned inside-out and placed over it for protection. The shallow opening is then used as a double-boiler style container for the hot items (a trio of very tasty empanadas), which are capped by a second plastic lid. 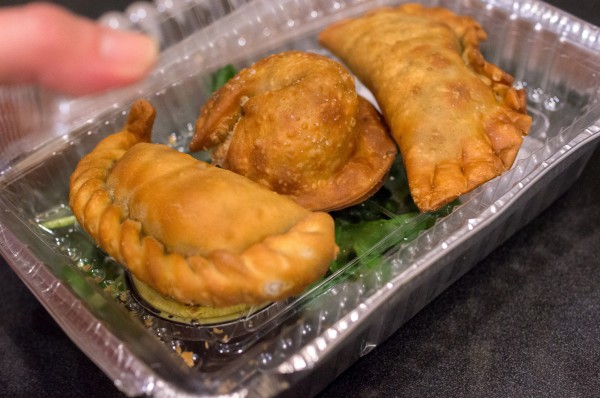 Seal everything up with the foil lip and you have a to-go meal that could ostensibly be unpacked up to half an hour later and look like it just came out of the kitchen.

Not sure if this is an official corporate “empanada to go” policy (Cuba Libre has three other outposts, in DC, Orlando and Atlantic City), or if it’s just the work of an inspired floor manager or kitchen worker, but it’s a valuable food industry trick that has the potential to improve innumerable take-out meals.

The to-go hack won’t work everywhere these days, since many restaurants have forgone the metal-and-plastic traditional containers for waxed cardboard or recycled pasteboard carriers.

Still, sometimes the answer to a common design shortcoming lies in using what you already have, but in a new or different way.

UPDATE: It appears McDonald’s was hip to this packaging idea back in the ’80s, when the company launched a new product called the McDLT. This was a burger with the hot stuff (the patty) on one side and the cold stuff (the lettuce and tomato) on the other side of a big, bulky, styrofoam container (environmentalism? ha! ). The product failed — fast food is not for eating later, it’s for eating NOW — but it did leave us with this hysterically bad Jason Alexander commercial.