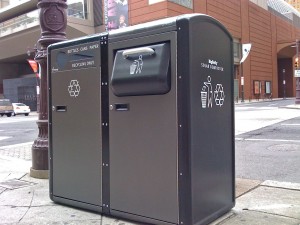 These will eventually replace all of Center City’s 900 wire trash cans, which are truly a mess.

The ones on Broad are paried up with recycling containers, the city’s first. Good step forward.

Visually, the dark brown of these compactors is a good look, much better than the busy green patterns that the initial test cans sported. Perhaps the cans will be different colors for different neighborhoods.

As far as usability goes, I don’t like touching trash cans, so that is the drawback. You have to pull open the top drawer to throw away something.  But that’s a necessary part of the design, allowing the compactor to work. Officials also hope this will stop the common habit of “tossing” trash towards the basket… and the common habit of missing.

Perhaps we’ll have less of a Philthadelphia?

Update: A foot pedal! Wouldn’t that solve the touching-the-dirty-handle issue? I suggested this in comments on several articles around the web…

One thought on “Big Belly”